I recently came across a pretty shot glass with white stripes and gold stars. There was an anchor stamped on the bottom, and the side of the glass had a small signature that read “Gay Fad.” Immediately, I recognized the anchor as being the symbol of the Anchor Hocking glassware company. But “Gay Fad”? That was a bit more puzzling.

This small marking sent me down the rabbit hole of all rabbit holes. There are tons of vintage items for sale online that tout the Gay Fad name. But there isn’t a lot of information on what Gay Fad actually was.

So this post is an attempt to combine the available info on Gay Fad into a short history of the company.

What is Gay Fad?

Gay Fad was a major glass decorating business that started in Detroit and ran from 1938-1945 . In that short 7 year period, they produced many designs that are now well-known and recognizable.

But the story should really start with an incredible woman named Fran Taylor.

Who is Fran Taylor?

Fran Taylor was born in the early 1900s to Andrew Joseph Habrat (a Pennsylvania coal miner) and Agnes Theresa Lopusnak.

She graduated from art school in Detroit, Michigan in 1938. It’s said that she then took $30 and opened up shop as Gay Fad Studios.

Back in 1939, Fran Taylor was a housewife doing her share of entertaining. She had a modern and contemporary spirit and liked to do things informally. But when she looked for a certain kind of glassware, hors d’oevres dishes and general buffet serving pieces, she found only heavy, formal, Victorian-type things. They were designed for home with staffs of servants.

Instead of bewailing her bad luck and the general stupidity of manufacturers, Fran Taylor set out to do something about it. She had no art training, but she knew what she wanted and was willing to work extremely hard to find a way of producing it.

That was 19 years ago. Today, Gay Fad Studios is one of the leading manufacturers of beautiful contemporary accessories for entertaining. Fran Taylor has never lost her touch with the young housewife who wants chic, attractive, practical and yet inexpensive accessories.

Anna Heywood, “The Inner You,” The Weirton Daily Times, 1958

Fran was ahead of her time – this was a period that didn’t see a lot of women business founders or leaders. And considering the company ended up being a multi-million dollar success, we’d say she did pretty well for herself! She was able to not only lift her out of poverty, but also create a brand that is still sought after 80 years later.

She was a colorful, vital and immensely kind person and is remembered fondly by her friends and family.

The company’s bread and butter was hand-painted glassware. The designs ranged from flowers and fruits to funky faces.

A very popular piece is the tipsy martini glasses (photo below from picclick.com). They feature whimsical faces on glasses with bent stems, giving them a “had a long crazy night” kind of look. I read somewhere (and now can’t find where) that the bent stems were initially an accident, and the company turned them into something fun. Then they became popular, so the company continued making them.

Older pieces were primarily “cold painted” with very clear brush strokes. Later on, the company acquired a lehr, which allowed them to use a firing process. The fired paint is what you think of now when you see professionally painted glassware. It adheres well to the glass and is much more durable than cold paint.

Gay Fad Studios painted on blank glass pieces manufactured by Anchor Hocking, Federal, and other well-known glass companies. This is why you can find glassware that has both the GF signature and an anchor stamp.

As far as we can tell, Gay Fad wasn’t associated in an official capacity with the larger companies, other than purchasing their blanks. But those companies must have held Fran and her company in high regard to allow their brands to be associated so closely.

How To Recognize a Gay Fad Piece

Look for a Gay Fad signature with a loopy G and a backwards F. It’s possible there are also some simply marked GF.

Unfortunately, there are many Gay Fad pieces out there without any marking. When they were produced, they either had a small signature or a sticker, but 80 years later, many pieces have lost their stickers.

So just because a piece doesn’t say Gay Fad doesn’t mean it’s not Gay Fad. It’ll be hard to tell if it is, though, unless you’re very familiar with the style.

There are so many wonderful Gay Fad pieces out there – take a look on Etsy or Ebay and you’re sure to find something you’ll love! 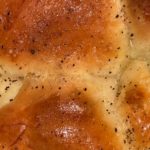 How To Store Milk Bread After Baking

How To Store Milk Bread After Baking

Recycling Peanut Butter Jars: What You Need To Know